Beeswax is the building material of the honey bee which they use to make honeycomb. It is secreted by worker honey bees from four pairs of glands on the underside of their abdomen. The bees only produce wax when they are producing honey. Because the bees use honey to obtain energy to produce the wax, beekeepers put the sheets of beeswax into the hives allowing the bees to produce more honey for us all to enjoy. 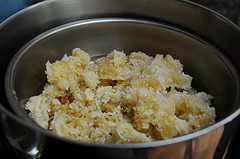 Beeswax candles burn brighter, longer, and cleaner than any other candle! The flame emits essentially the same light spectrum as the sun and in the process of burning emits, negative ions that are known to clean the air and invigorate the body (reportedly, stimulating the pituitary gland thus increasing creativity, intuition and dream activity). These negative ions help rid the air of pollen, dust, mould, toxins and many other pollutants. This feature makes beeswax candles ideal for allergy sufferers.

Air contains billions of electrically charged particles called ions. Ions act upon our capacity to absorb and utilise oxygen, and therefore cause powerful effects on our lives and well being. The ions in the air can affect our mood, energy and health. Negative ions actually feel good. Too many positive ions make us feel bad and they are loaded down with pollution and allergens that are drawn to them and suspended in the air. Negative ions, on the other hand, remove the pollution and allergens from positive ions, allowing them to drop harmlessly to the ground.

Non-toxic and non-carcinogenic, beeswax candles release negative ions when burned. Anything floating in the air around you is doing so because it is positively charged. This includes food, garbage, and pet odours, toxic emissions from household furnishings, dust, and even viruses and bacteria. Negative ions released from beeswax candles bind with positive ions in the air to create a complete molecule. As a result, positive ions carrying dust, mould, odours and toxins become heavier and fall to the ground.

As it burns, the candle flame convects air, passing it through the flame. It burns off pollutants in the same manner as a catalytic converter in your car. Thus, beeswax candles are natural air purifiers.

Be careful when burning paraffin candles at the same time as beeswax! The negative ion effect may coat your furniture with soot from the paraffin candle!

Over time, beeswax produces a natural tannin that coats the surface with a whitish film called "bloom." This can be dissolved by gently passing a blow-dryer over the surface, or rubbing the surface with your finger. Apply the natural residue on your finger underneath your eyes or on your hands as a healthy skin moisturiser!

Although initially more expensive to purchase, beeswax wil prove a better investment in the long run. Beeswax flame burns hotter and brighter with a lovely golden halo, but, the wax also burns much more slowly and, therefore, lasts longer than other types of candles.